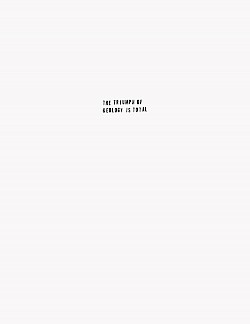 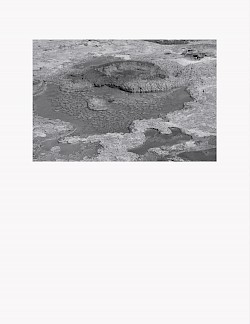 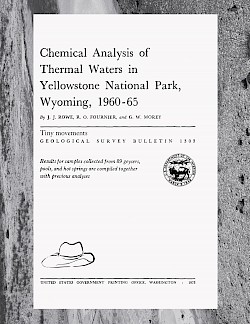 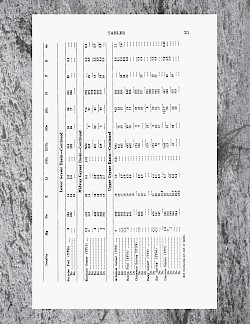 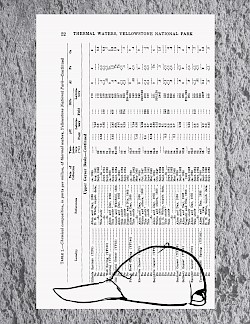 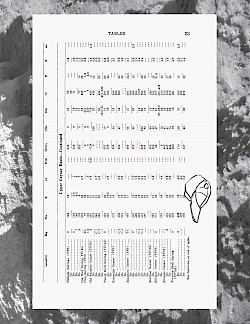 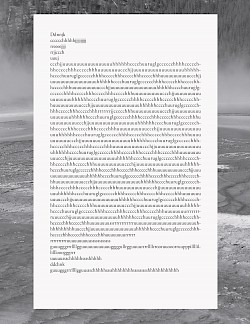 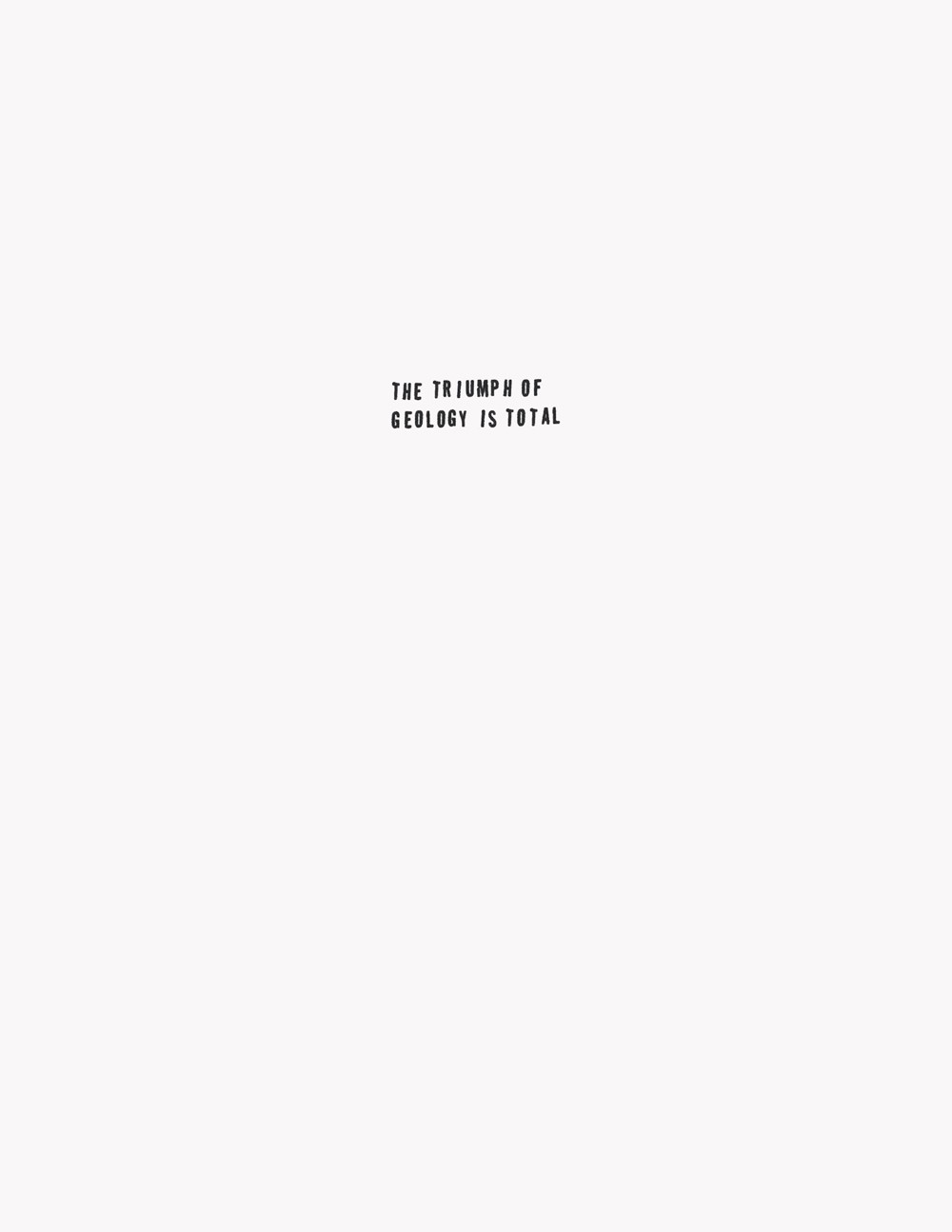 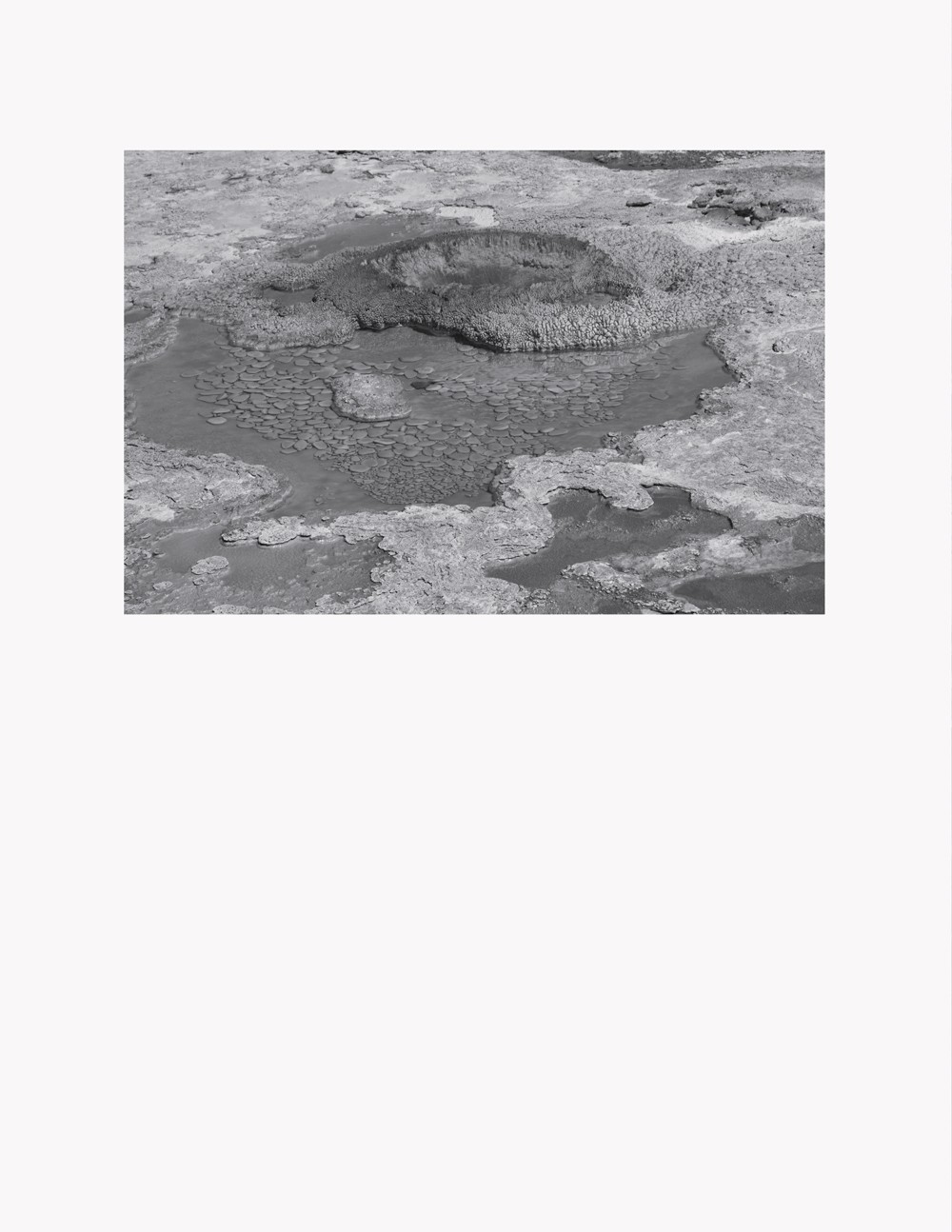 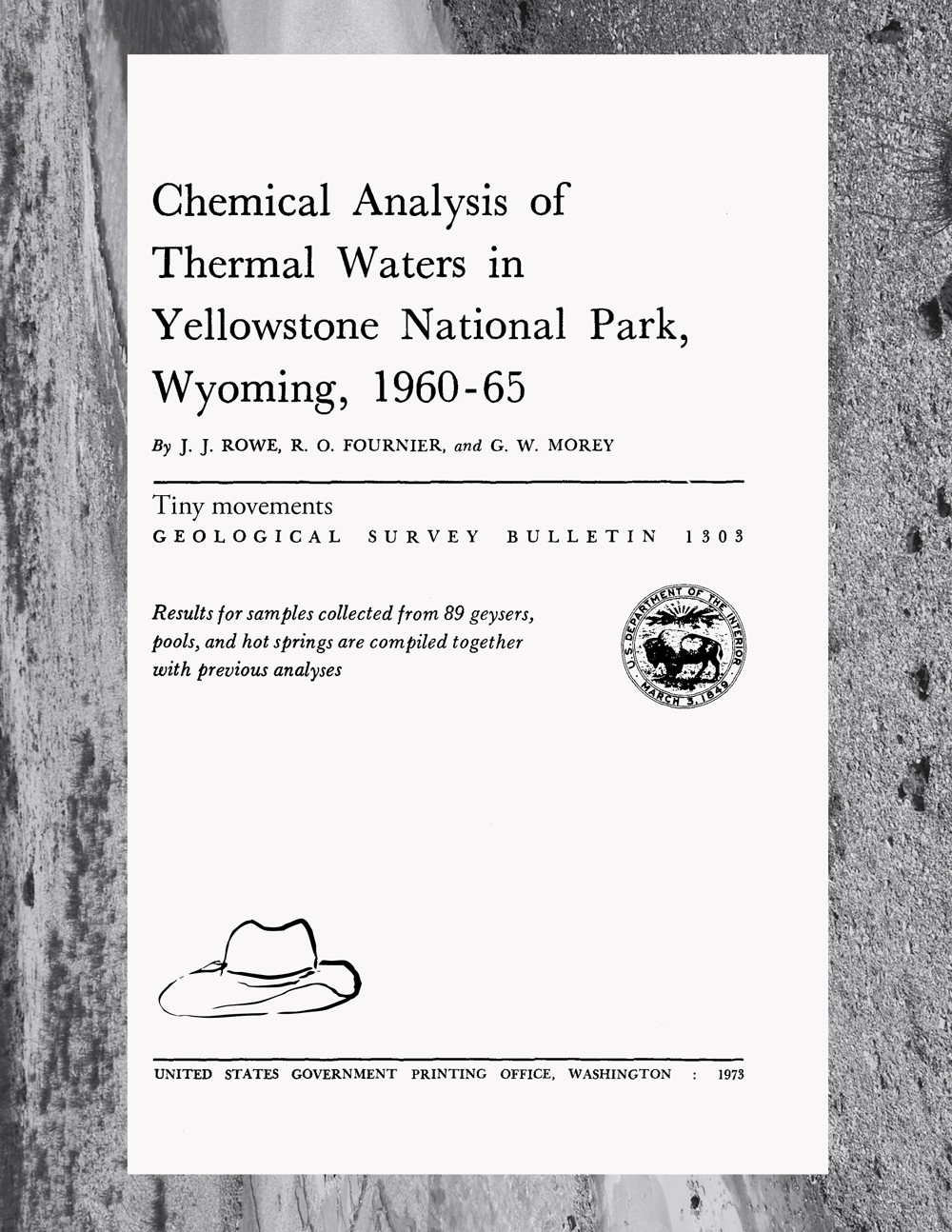 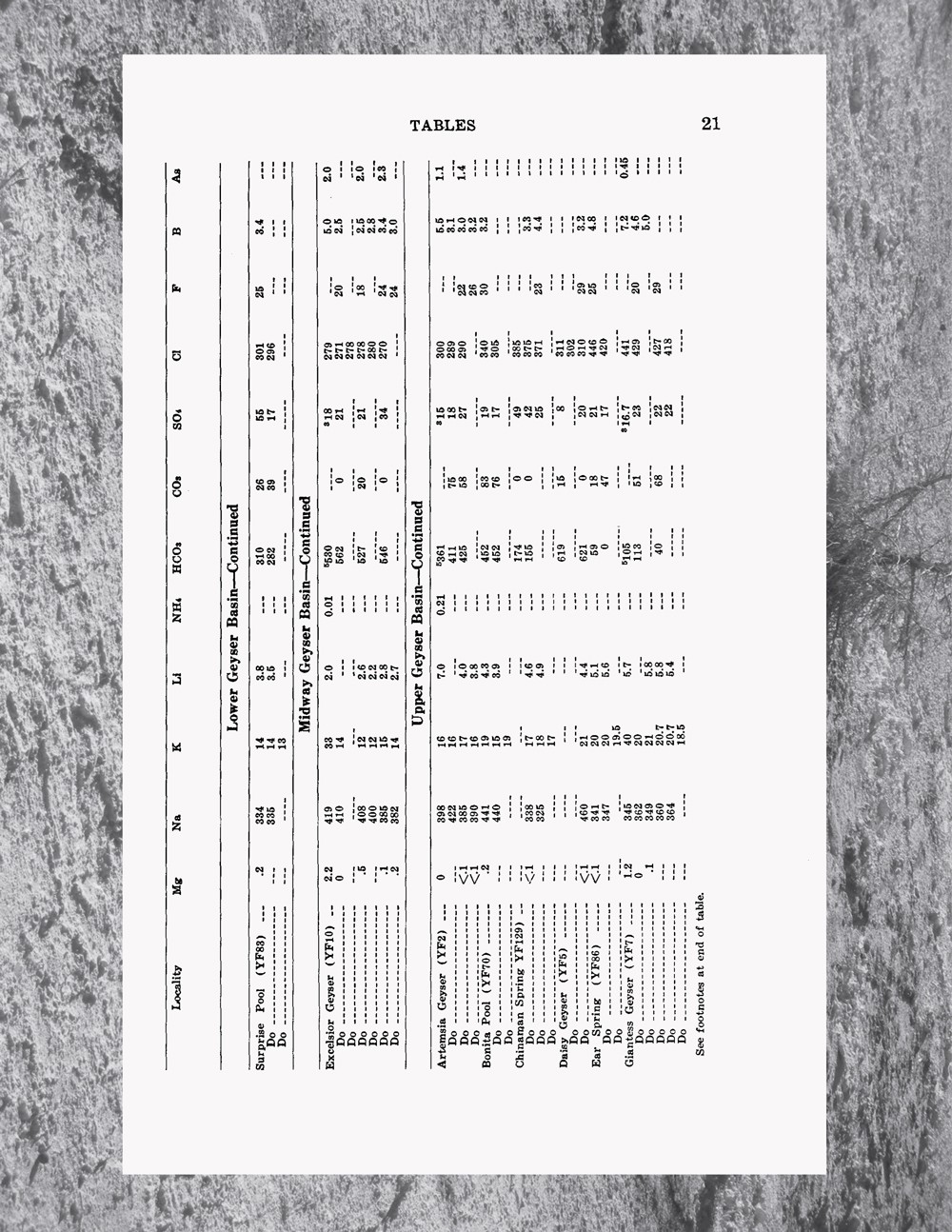 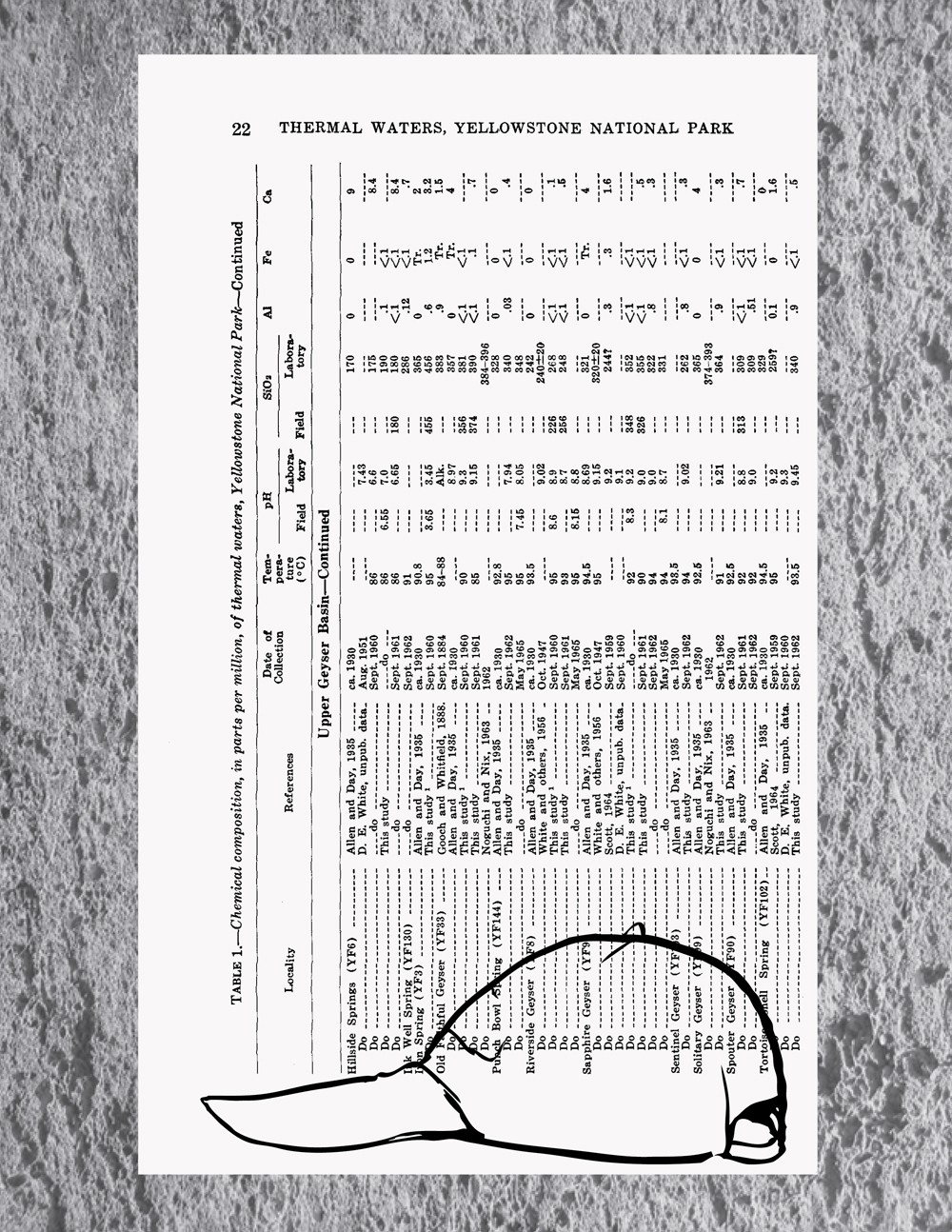 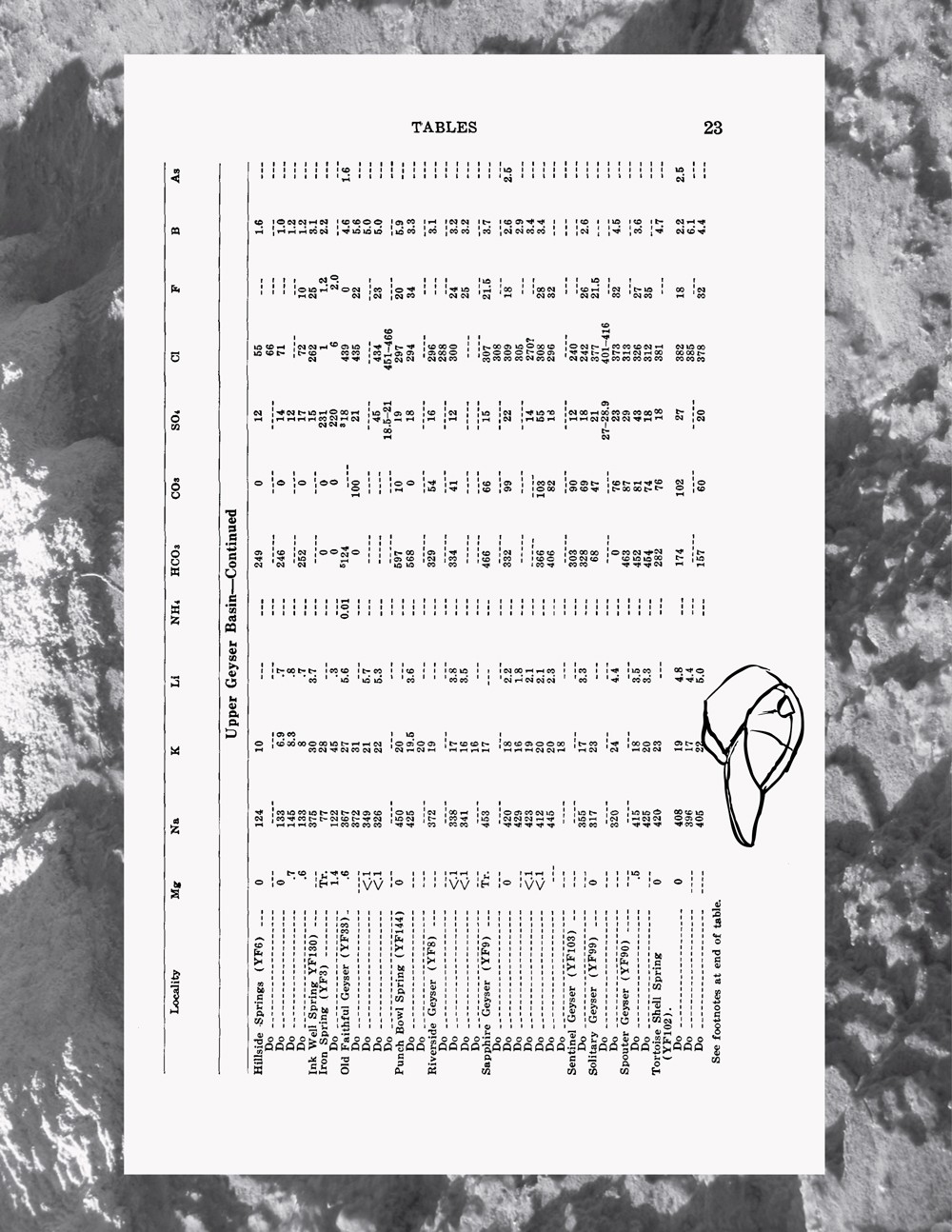 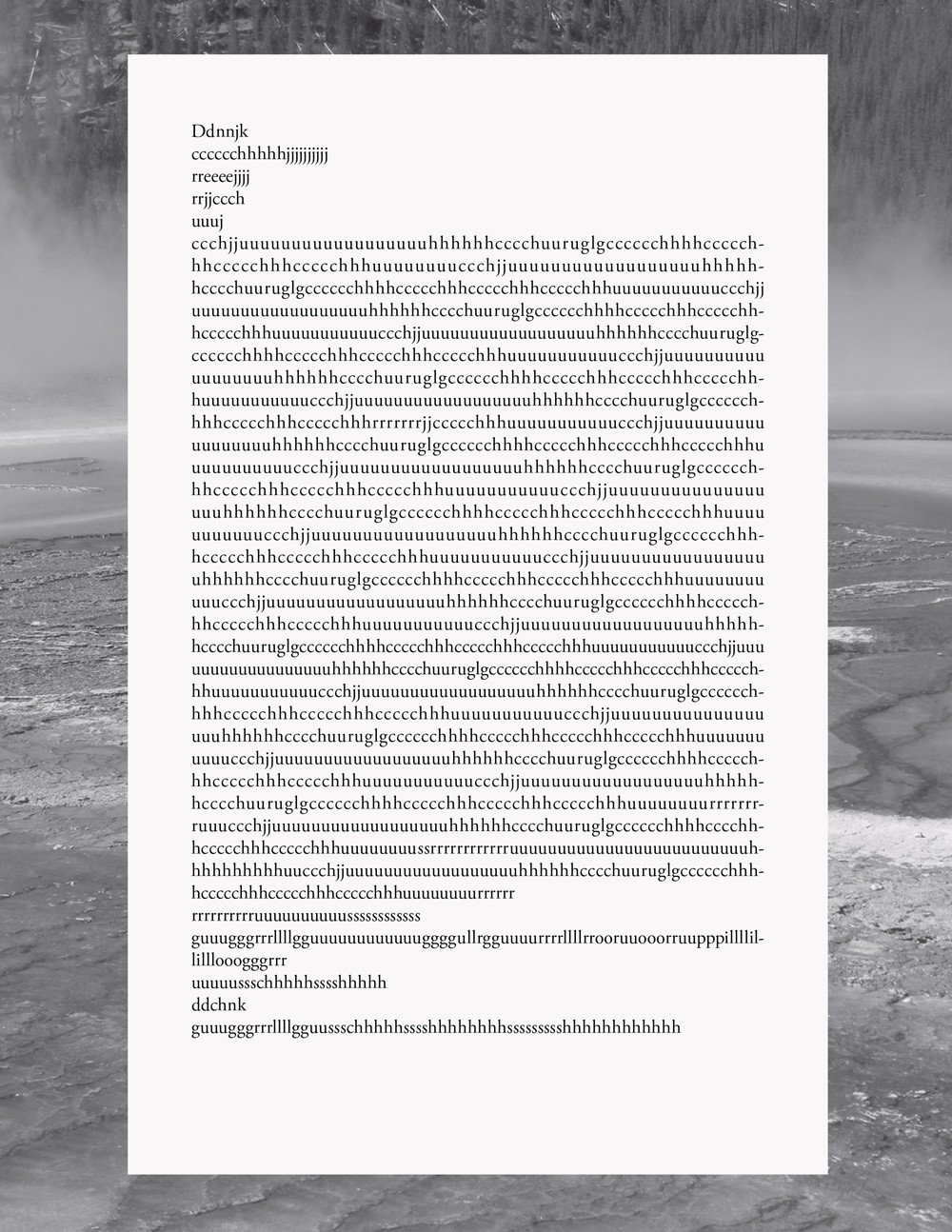 the triumph of geology is total publication is a collaboration between Amelia Bywater and Scott Rogers, drawing on elements of a performance by Rogers in 2016. The performance utilized a set of photographs, objects and a script that referenced a journey to Yellowstone National Park, exemplifying the personal exchanges with nature despite its ultimate indifference to us.

The publication expands upon this performance, with a central focus on a scientific document that provides analysis of the water chemistry of different geysers and hot pools in Yellowstone National Park. Photographs by Rogers and his father form the background of each page, the images literally underlying the scientific content. This document is also annotated with texts and drawings that Bywater and Rogers treated as glyphs – characters that accent the text rather than disrupt its content. These glyphs locate the body, its processes, extensions and frailties alongside hard data, creating an expanded document to represent the geyser fields.

Amelia Bywater lives in Glasgow, Scotland. Often working with text, and occasionally installation of video and objects, much of her art practice involves moving across collaborative projects, often exploring notions of the self in discursive space; and intimacy, meaning and the body in technological space. Points of reference act as vehicles for performative exploration, for instance, of the aesthetics and structures of labour: its geographies, genders, technologies, intimacies, constraints, invisibilities. In July 2015 she began loomloomloom, a temporary publishing project, a series of collaborations and invitations to artists and writers. loom will make intermittent appearances in venues around Glasgow, scoping out the indistinct spaces of writing, speaking and performing and their translation within the actual spaces of art and work. Scott Rogers lives in Glasgow, Scotland. His work relies on duplicity, multiplicity or interdependency of meaning between objects and research. This might be thought of as a kind of subterfuge that is focused on introducing increased complexity to the field of the exhibition. The purposes of this strategy are not to impose the responsibility for forming meaning on the audience, but to implicate the audience in a precise, but challenging ethical/philosophical position. Many of Rogers’ works develop from human relationships to the natural world, and the often complicated intertwining that these relations produce. Recently, Rogers presented solo exhibitions at Collective (Edinburgh, UK), Southern Alberta Art Gallery (Lethbridge, CA), YYZ Artists’ Outlet (Toronto, CA), Glasgow Sculpture Studios (UK), a collaboration with Sarah Rose at Artspace (Auckland, NZ) and PM Galerie (Berlin, DE). Group exhibitions including his work have been held at the Art Gallery of Alberta (Edmonton, CA), Bergen Kunsthall (Bergen, NO), The Hunterian Art Gallery (Glasgow, UK), NurtureART (New York City, US), Platform (Melbourne, AU), Nanaimo Art Gallery (Nanaimo, CA), Center (Berlin, DE), and Dog Park (Christchurch, NZ). Rogers has made publications with Carol Williams, Mark Von Schlegell, Sarah Rose and Richard Frater, Justin Gradin and Eileen Wennekers, Mason Leaver-Yap, Sam Forsythe, Simon Buckley and Amelia Bywater. In spring 2017 he will co-edit an issue of the journal F.R. DAVID with Will Holder, while in residence at KW Institute for Contemporary Art in Berlin.